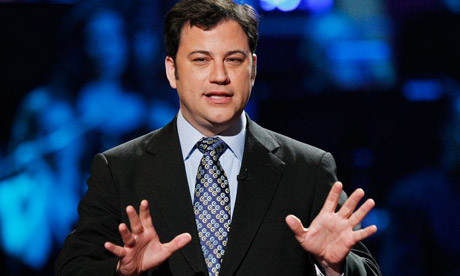 According to the NY Times, Jimmy Kimmel started the ABC upfronts (rolling out the new Fall shows for advertisers) with a comedy bit and, true to most comedy, it had a few grains of truth in it:

Bouncing onto the stage at just after 4 p.m., Mr. Kimmel self-deprecatingly declared, “All of ABC’s late night comedy talent is assembled here on one stage.” After rattling off a few statistics about the affluence of his viewers, he then admitted that he’d made all the numbers up. (He said so in a more obscene way.)
…
Then, in a “Jerry Maguire”-like moment of clarity, Mr. Kimmel said, “Everything you’re going to hear this week is” nonsense. “Let’s get real here. Let’s get Dr. Phil-real here. These new fall shows? We’re going to cancel about 90 percent of them. Maybe more.”
…
To the ABC advertisers, Mr. Kimmel said, “Every year we lie to you and every year you come back for more. You don’t need an upfront. You need therapy. We completely lie to you, and then you pass those lies onto your clients.”
…
Returning to ABC’s advertisers, Mr. Kimmel said, “Next year on ‘Grey’s Anatomy,’ your product could kill Dr. Izzie. It just depends on how much you want to pay.”

Wow. I know it’s comedy, but we’re getting a bit too close to reality here. One of my favorite relatively-new shows is Chuck, and now word comes that the only reason it is getting renewed for a third season is Subway’s integrated sponsorship (read: “mammoth product placement”) for the next season. The television landscape is crazy. Good shows get cancelled (”Pushing Daisies”), bad shows keep going on (“The Bachelor”), and then, in a first, two fan/critic favorites actually get saved from the ax (the aforementioned “Chuck” and Joss Whedon’s “Dollhouse”). Crazy times.

Back to Jimmy Kimmel. I remember right after 9/11, watching one of the first Letterman broadcasts after the attacks, and turning to my wife and saying “comedy/irony/farce will never be the same again — they may never come back.” Boy, was I wrong. There are still a million and one things to make fun of, and I’m glad that people are roasting what needs to be roasted.